The Eixample, despite being a typical residential neighborhood, contains authentic gems and palaces that became a collection of the most pure modernist essence. As a typical residential district of the bourgeoisie and in a privileged location between the old town and the village the district of Gràcia has been the testing ground for most renowned Barcelona architects and modernist artists. This fact is easily observable in the facades, which also save many examples of later interventions. Going for a walk in the Eixample is like being in an open-air museum.

We could fill pages and pages talking about the all the wonders built in the Eixample, but we want to stop at four of them which, by history or by being unnoticed gems, are unjustly ignored in the guidebooks.

For this reason, we will let apart the very popular and magnificent works such as those seen in the “bone of contention“, other Gaudi’s jewelry like Sagrada Familia and Casa Mila (La Pedrera), or buildings which are already admired like the Casa de les Puntxes.

Cerdá houses: the beginning of a dream

This group of houses , protected as cultural buildings and today transformed into a hotel which has commited to rehabilitate the facade with modernist motifs, are honored to be the beginning of the dream of Ildefons Cerda: the first houses built in the Eixample and whose form and distribution had been imitated in order to form what today is known as the Eixample Esquerra and Eixample Dreta.

The Cerdá houses, named after the developer Josep Cerdá and not in the name of the creator of the Eixample, are located in the district of Conception, at the confluence of the streets Roger de Lluria and Consell de Cent. They were built in 1864 by the architect Antoni Valls Gali, just when the final layout of the streets of the Eixample was approved.

Together with the Cerdá Houses the Tarraco House pretends to be the first construction of the Eixample .Controversies around the Tarraco House did not ended in the “inaugural” debate, since it received some threats of demolition after being a squat for decades.

A huge graffiti of great artistic value (although not officially recognized) welcomes the visitor from the “chamfered”  front and invites you to discover more about this building. It is a perfect plan for the Sundays to enjoy this graffiti from the market of Sant Antoni.

The House Palau Baró de Quadras is admirable from the beginning to the end. Its main facade, which overlooks the Diagonal Avenue, is a great example of the plateresca architecture (a baroque Spanish style) beyond the modernist influence in which it is encompassed.

Lavishly decorated and without leaving an empty space, it’s almost imposible not stopping in front of it, in an area where every building competes to be the best. But  its beauty cannot be appreciated just at its front side in Avenida Diagonal.. On its back, located at Roselló Street, we can appreciate a simpler but not less decorated façade, where typical floral ornaments are well represented in the modernist balconies. 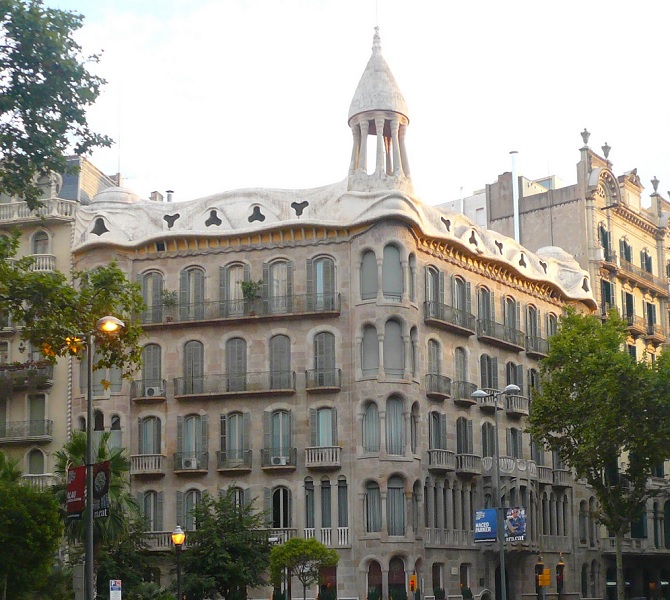 The Sayrach house is a late modernist work by the architect Manuel Sayrach, with a considerable influence of Gaudí in the use of curved lines. It will immediately bring to our mind the unmistakable style of the Casa Mila, the medieval pieces of the Casa de les Puntxes and the bony shapes of the Casa Batllo- This masterpiece located at the end of the pedestrian street Enric Granados is a great collection of the modernist philosophy.

One thought on “5 architectural gems in Eixample”