When we travel, we all have an idea of the city’s icon sites which are a must visiting, the most important museums, leisure-time plans, places where we wish to eat and drink like a king. But whether we wish to divert from our original plans or if we have some extra days in a rental apartment and want to explore hidden places of the city, we will always encounter charming corners, filled with legends and stories and that will allow us to learn about the city we are visiting from a different perspective

In Barcelona we may find many examples of such corners where arts, tradition, legends and monumentality go hand in hand to show us the city’s hidden face, where to find it?

Several corners of Andalusia in Barcelona:

Several secret places in Barcelona refer us to the south. It is well known that many of the neighborhoods that form Barcelona today, hosted decades ago a significant number of immigrants  coming  from Andalusia, Murcia and Extremadura in search of the prosperity promised by industrial Barcelona, a city eagerly  receiving labor that would help it to grow economically.

Thus, great communities of Southerners settled in Barcelona and sought to create their own corners where they recreate that piece of Andalusia in the form of flowery courtyards or whitewashed houses. We find remarkable examples of these corners in the following secret places of Barcelona:

… And one from New York

Did you come to Barcelona seeking for a cosmopolitan place? Let’s move from the south to the genuine New York through its most international symbol, the Statue of Liberty, which we can see in the Mediterranean capital (yes, in Barcelona) exposed at the doors of the Arús library.

This is a secret corner in which it is worth to get lost, with its innumerable literary jewels, ancient columns and precious wooden shelves, in the company of the great lady of America who will be waiting for us. And if we are people more attracted by the beach, there is another reproduction of the statue a few kilometers away from Barcelona, in the Dalinian and beautiful village of Cadaques, and this statue has two torches instead of one. 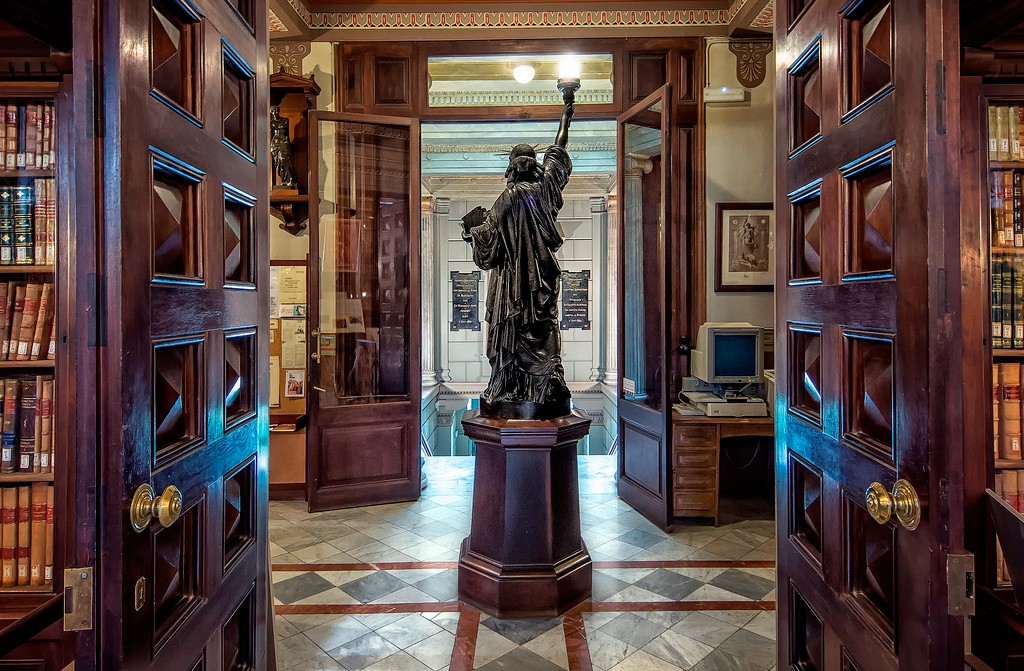 Barcelona secrets through its underground

Very near to your apartment in Sagrada Familia, you may wish to join to an adventure that even though it does not exhibit the most beautiful of Barcelona, it is a curiosity and certainly an amazing experience: a route through the urban sewers thanks to the Depòsit de Retenció d’Aigües Pluvials Joan Miró.

Taking this unusual but exciting excursion, not only will make you feel living in a film environment, but you will learn how the residual or rain water is channeled and what is under the modernist buildings of the Eixample in Barcelona.

If you want to enjoy the curiosities and strange stories lying under Barcelona’s ground and in a more aseptic way and different from its crowded subway, in several points of the city you can find traces of anti-aircraft shelters that in some occasions like the Mercé or the celebration of the 48 hours Open House festival, are exhibited to the public along with the stories that fomented the construction, most of these refuges date since the tragic civil war

You can visit these anti-aircraft refuges both in the cheerful Plaza del Diamante in the neighborhood of Gracia or the “refuge 307”, at the foot of Montjuïc in the populous Poblesec neighborhood.

Secret places of Barcelona in full view: the bunkers of the Carmel

And from the underground to the highest in Barcelona: on the hills of Rovira, one of the most iconic mountains of Barcelona, we find an open secret, at least among Barcelona’s population: the bunkers of Carmel, another of those refuges that the damn Spanish civil war left in the city to protect itself when was under the 200 daily attacks and which left other effects as the remnants of shrapnel in the charming Sant Felip Neri square.

The Carmel bunker is a site which has become a silent witness to the  city’s history and which today is one of the most scenic and popular viewpoints of the skyline for the residents in Barcelona, who crowd in their terraces to appreciate the beautiful sunsets of this city that never ends to amaze you.