Barcelona is globally known for being the city of modernism. This artistic movement emerged at the end of the 19th century and its main conviction was the big relevance of aesthetics.

Modernism had influence over all the artistic fields including, of course, architecture. Modernistic architects introduced new concepts and elements in their buildings such as different construction materials, breaking forms and shapes and taking nature as designing inspiration.

Thanks to the support of catalan bourgeoisie and the wonderful architects of this time, Barcelona became the capital of modernism. In this post we will present 10 modernistic works you can’t miss when you’re visiting this astonishing city. 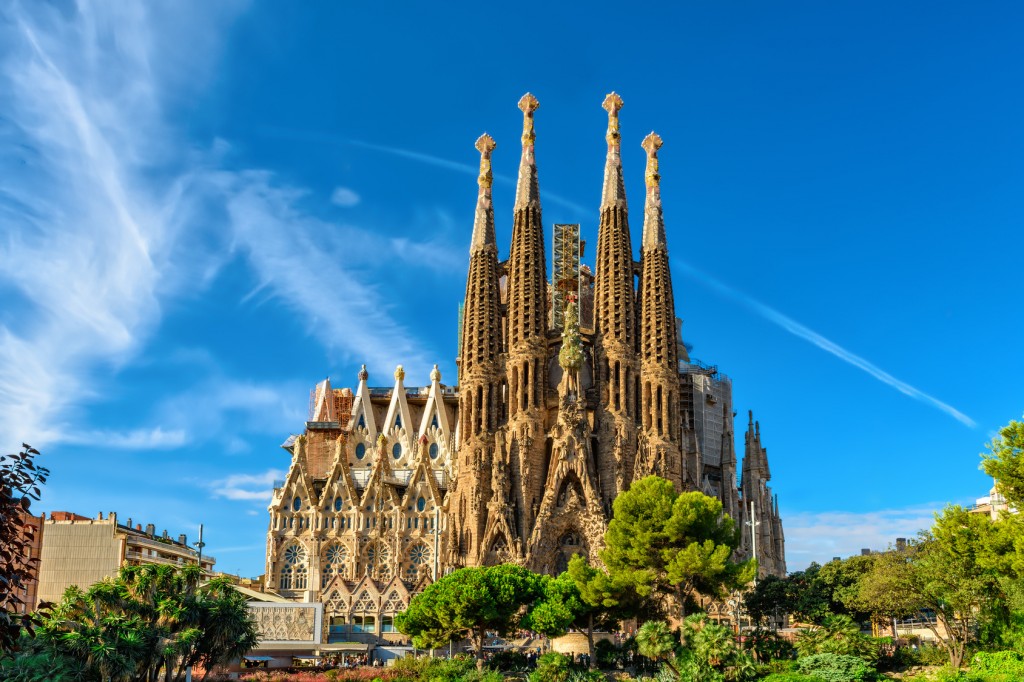 This temple is probably one of the most famous buildings not only in Barcelona, but also in the world. Designed by Antonio Gaudí, this huge basilica is still under construction and it’s expected to be finished in 2026: the centenary of Gaudi’s death.

La Sagrada Familia has two facades ,Nativity and Passion, which represent important moments of Jesus Christ’s life. The interior of the temple is greatly spacious and the colourful light that come into through the stained glass windows creates a magical environment.

With its twisted shapes and elements related to nature such as creepers, fruits, butterflies, turtles, chameleons, etc La Sagrada Familia is one of the biggest representations of modernism in Barcelona. 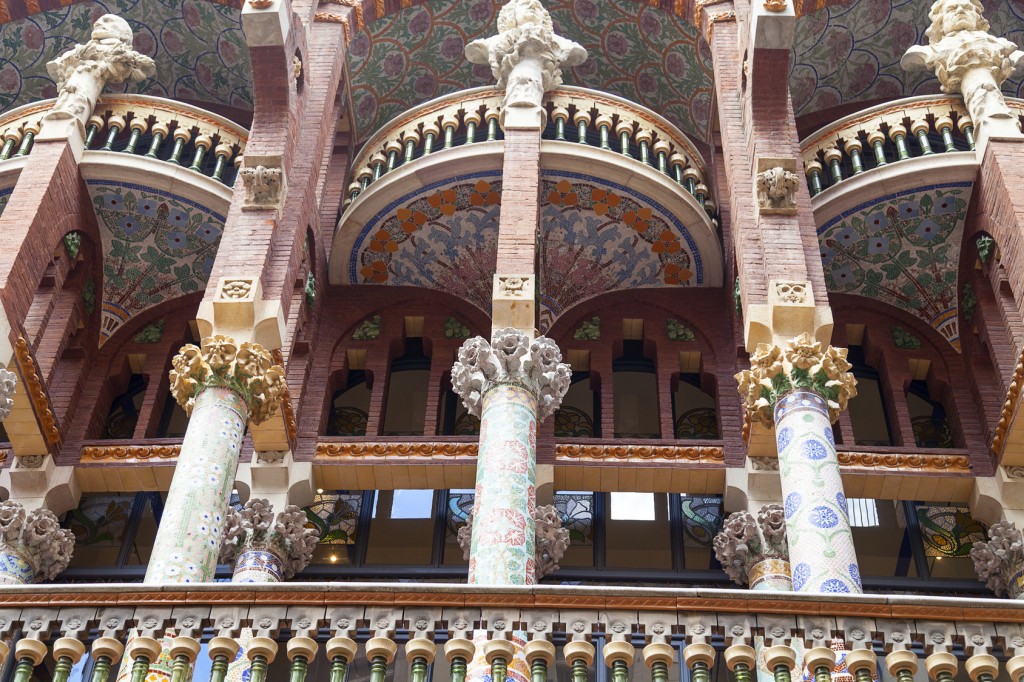 Just in the corner of two narrow streets in the Casc Antic area we find Palau de la Música Catalana. This modernistic work is a concert hall designed by the architect Lluís Domènech and built between 1905 and 1908.

The facade of this building is richly decorated with elements from traditional Spanish and Arabic architecture. In one of the corners, a beautiful sculpture from Miquel Blay embodies Catalan music and  if you pay attention to the space above the big columns, you’ll be able to see several busts representing famous musicians such as Beethoven, Bach or Wagner.

Additionally, from our Via Laietana room you can be there in just 2 minutes by foot. 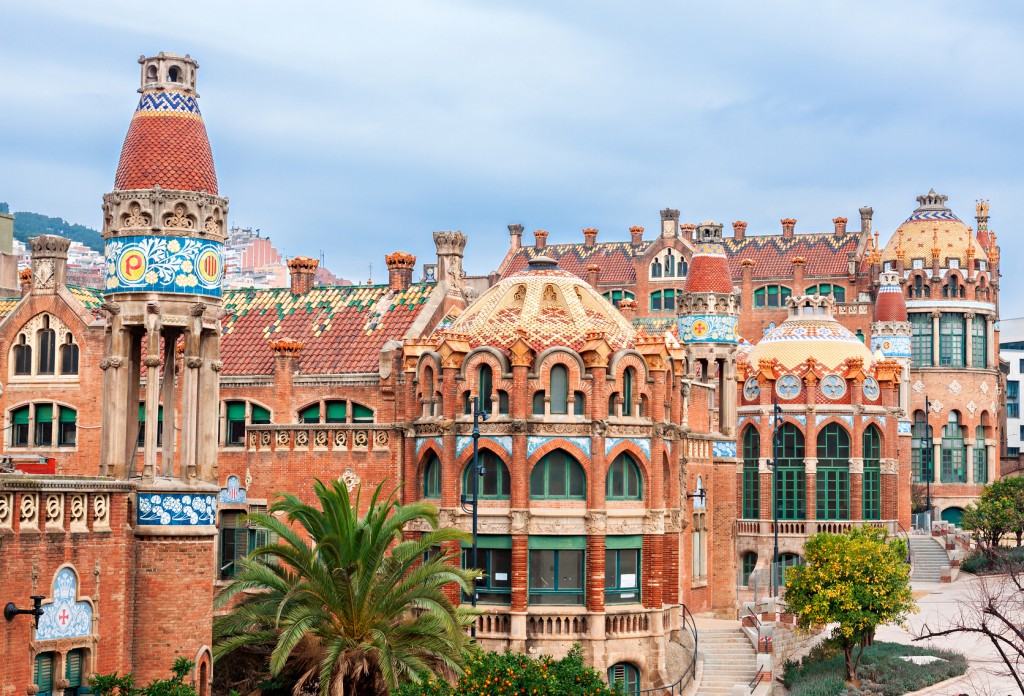 This modernistic architectural construction was also designed by Lluís Domènech and, together with Palau de la Música Catalana, it was identified as UNESCO World Heritage Site.

Hospital de Sant Pau received its name from the banker Pau Gil, who paid the new buildings in 1920. It’s a complex of 19 pavilions, all of them decorated with different sculptures, paintings and mosaics.

The main pavilion was built with caravista bricks and, with its germanic clock tower, is ones of the most beautiful modernistic constructions of the city. 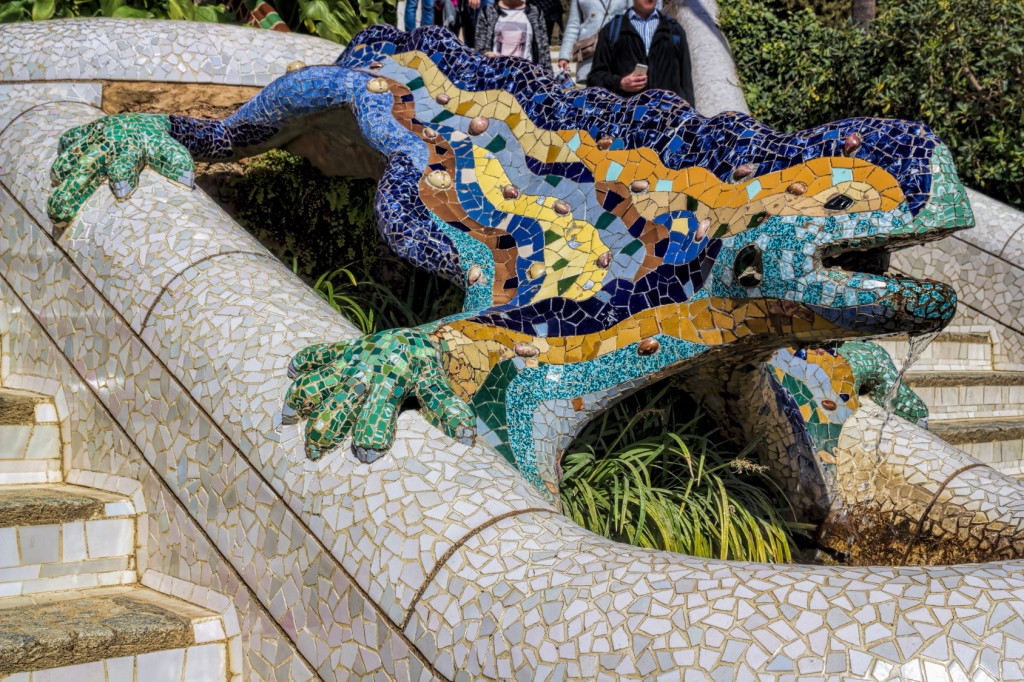 This park was originally conceived by Eusebi Güell and designed by Antonio Gaudí as a high-quality residential area, but due to its unsuccessful commercial development it finally opened as public park in 1926.

Parc Güell is decorated with different buildings and sculptures inspired by nature and geometry and it’s full of symbolism related to politics, religion and catalan culture.

Its main terrace, surrounded by a long bench in the form of a serpent, is one of the most visited locations of Barcelona. From there, you can enjoy of views of the city that will get you speechless.

Palau Güell is a palace designed by Antonio Gaudí for Eusebi Güell, one of the most important entrepreneurs in the industrial revolution in Catalonia. The mansion was Eusebi’s home and he used it as scenario of entertaining meetings with high-society guests.

It has a terrace with 14 different chimneys, each of them originally decorated with materials such as ceramic, glass, marble and porcelain.

Located near to the port and the Ramblas, Palau Güell is opened to visits. So be prepared to enjoy of a great architectonical work with beautiful modernistic pieces of furniture and chimneys with splendid shapes and colours.

Casa Milà is located in Passeig de Gràcia, which is one of the most famous avenues of Barcelona and counts with several modernistic buildings.

Popularly known as La Pedrera, it was commissioned by Pere Milà and designed by Antonio Gaudí as a constant curve. Likewise other Gaudi’s works, Casa Milà design is full of symbolism and allusions to nature and religion.

One of the most beautiful parts of the building is the roof with several elements constructed out of brick covered with lime, broken marble, or glass.

This modernistic house was also designed by Gaudí and it’s also located in Passeig de Gràcia, really near from Casa Milà.

Casa Batlló is also known as Casa dels Ossos (House of Bones) because of its skeletal, visceral appearance. Observing its facade we can easily detect typical elements of Gaudi’s works such as plenty of curved shapes, colourful mosaics and references to nature and catalan culture. In this case, we find a dragon and a dinosaur.

This magical building will make you feel you’re living into a fairy tale.

Casa Martí is another astonishing example of modernism in Barcelona designed by Josep Puig i Cadafalch in 1986. Unfortunately, the building was destroyed during the civil War, so the existing one is a reproduction of the original.

On the ground floor we find the Quatre Gats tavern, which was the cultural hub of Barcelona at the beginning of the 20th century. In fact, a young 17-years-old Pablo Picasso was one of their regular visitors.

Another curiosity for keen on films: some scenes of Woody Allen’s film Vicky Cristina Barcelona were filmed there, so you can enjoy a romantic dinner feeling like Scarlett Johansson and Javier Bardem.

Located just next to Casa Batlló, this modernistic monument was designed by Josep Puig i Cadafalch to be the residence of the famous chocolatier Antoni Amatller. That’s why its facade emulate a classic chocolate bar.

Along with Casa Batlló and Casa Lleó Morera, these three make up the famous Illa de la Discòrdia (Block of Discord).

Casa Lleó Morera was designed by Lluís Domènech i Montaner and it’s located a few steps from Casa Amatller.

The design of the building, as usual in modernism, is inspired by nature and catalan culture and decorated with sculptures, colourful mosaics, ceramics and a great collection of modernistic pieces of furniture.

These are only some of the considerable amount of modernistic works we can find walking through Barcelona. Other lovely buildings such as Casa Granell, Casa de les Punxes, or Casa Calvet worth a visit too.

Therefore, we strongly recommend putting your more comfortable shoes on and living in first person the magic of modernism in Barcelona.